Written by Duncan Connor on October 5, 2016. Posted in Blog

You Didn’t Do Anything Wrong…So Why Is Your Account Under Review? 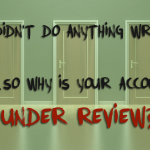 The agency review process is like getting a text from your significant other that says, “We have to talk.” It doesn’t necessarily mean something bad is on the horizon, but it’s sure to cause some anxiety for a while.

Agency reviews happen for a lot of different reasons, but hardly any of them have anything to do with the agency screwing up. It’s true that a particularly misguided or unsuccessful campaign may trigger a review sooner rather than later, most of the time there are ordinary boring reasons for agency reviews.

DailyVista’s Vulnerable Account Index, which ranks the likelihood that a brand is going to put an account under review, uses an algorithm that includes dozens of factors. The strongest indicator that an account may be heading into review is the appointment of a new CMO.

A new CMO may have relationships with other agencies they’ve worked with in the past, and they want to continue that relationship in their new position. Or they may just want to review and reset expectations with the existing agency.

Last year got off to such a brutal start for media agencies going into review that AdWeek called it Mediapalooza, with billions of dollars in ad spending going under review and becoming available for agencies to win. AdWeek includes a quote from a source at BMW, who said, “It is a standard BMW process to put all contracts up for review every few years,” which reinforces the ordinary, cyclical nature of the agency review process.

Average tenure of CMOs decreased for the first time in a decade in 2015, which is an indicator that more CMOs are on the move, and therefore have fewer years of tenure in their current position. If that trend continues it’s likely that more agencies are going to head for review in the near future.

“Procurement often reviews relationships every 3-5 years, and CMO median tenure is about 26 months. So, if an agency incumbent isn’t battling against a new CMO, procurement wll look at the relationship shortly anyway,” said Josh Stone, managing editor and lead new business analyst for DailyVista. “Procurement-led reviews usually go with the incumbent anyway, but it can often be a huge a waste of money and time for both sides.”

Brands Change Direction All The Time

As brands figure out what channels represent better ROI for them, they move budget around. For example, a brand that had an unimpressive return on programmatic last year might look to change its marketing recipe, beginning with a review of the agency providing the programmatic service. This review could be to determine whether the problem was the strategy employed by the agency, whether the brand’s goals were unrealistic, or if the creative (provided by a separate creative agency) didn’t stand out from the crowd.

And it’s not just massaging budget numbers. Sometimes a brand might decide it needs to investigate its options before putting money behind a strategy or technology for the first time. Adtech and marketing technology are hot industry buzzwords in 2016. And you probably haven’t seen anything yet. The advent of augmented and virtual reality entertainment (like this incredible VR movie) could cause a major media placement shift over the next few years. And it’s not just movies—augmented reality is on the way, and when Magic Leap’s Mixed Reality engine and MicroSoft’s HoloLens find their way the mainstream, all bets are off. These new technologies have the potential to open an infinite and hyper-targeted market for media sales.

What Will Happen At The Review?

You’re probably accustomed to periodic meetings with your clients, from project kick-offs to QBRs and new direction meetings. A formal agency review isn’t significantly different in terms of preparation. You’re going to have to be prepared to discuss at least a few of these topics:
• the original brief
• how your formulated the strategy
• how it related to the goals that were set
• what unexpected challenges you encountered
• how you overcame them
• your results
• what strategies you would employ in the future
• what other services you can offer to the brand

After the review the brand will take some time to consider its options. They may even talk to other agencies to compare processes, strategies and even individual relationships. Yes, even the individuals on the account and how they engage with the client.

Ultimately the incumbent agency will either continue as the agency of record with some or no changes requested, or the brand will move to an alternate vendor.

Whatever the client chooses to do, it’s nothing personal—it’s just business. If your client decides to go with a different agency, how you respond to disappointment will likely affect whether you’re the client returns to you in the future.

Consider the Rinck agency. For nine years, the Rinck multiple channels for Gorton’s Seafood. In September 2016, Gorton’s consolidated agencies and Rinck lost a long-standing client. How did the agency respond? With this amazing video that reiterated how much Rinck had enjoyed its relationship with Gortons.

If that video gives you the warm-and-fuzzies, imagine the positive impression it left with Gortons.

It’s important to remember that a review is just a review. It’s not a foregone conclusion your agency is on the chopping block, but you can rest assured if your agency is under review, you’re not alone. At the very least, try to see a review as an opportunity to find out what direction your client is moving in. Try to determine for yourself if that shift is representative of the client’s market, and if you might be able to win business from other brands that are shopping around for a new agency.